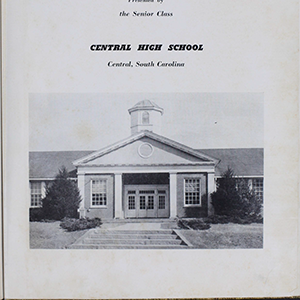 After an election in Pickens County from a new school act, the voters decided in February 1908 that a new Central High School should be built. Shortly thereafter, work was begun on this new high school building on Church Street, a modern brick structure with six large classrooms, a large auditorium and space in the basement for additional classrooms. This building was state-of-the-art with central heating and indoor plumbing. Designed in the Classic Revival Style by architect Christopher Gadsden Sayre, a native South Carolinian; it was built by J.H. Hall, a local Central citizen who was contractor and brick mason.

J.B. Lyles was the superintendent in this building from 1908 to 1909 and the first teachers mentioned were Mattie May Morgan, Lila Folger Ramseur and Ada Craig Alexander. Still incomplete in 1918, the James L. Orr United Daughters of the Confederacy members “voted to contribute the deficit needed to finish lighting for the auditorium of this new High School building in the grand total amount of $30.”

For the 1935-1936 school term, the new high school opened across the street; the latter then became the elementary school with a cafeteria in the basement. The new building, with eight large classrooms, accommodated a well-equipped home economics department, a roomy library, and agriculture department, typing and other classrooms; also a large gymnasium for indoor sports.

The 1909 building and the 1936 buildings are presently being used as apartments.

The yearbooks by Central High School were published from the 1936 building. They were discontinued during World War II and published until 1955 when they moved to Daniel High School.