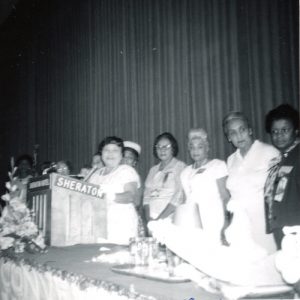 Ethelyn Murray was a native of Charleston SC and attended Simonton School and the Avery Normal Institute, graduating in 1914. She taught in several counties in South Carolina before enrolling at Voorhees Institute in 1918, studying religious and elementary education. In 1920, she relocated to Mobile, AL, teaching for five years. She received a Rosenwald Scholarship to Tuskegee Institute to study physical education and dressmaking. Returning to South Carolina, Murray worked at Voorhees for nine years and in 1936, she moved back to Charleston, teaching at Henry P. Archer Elementary School, and at Hampton Institute, VA in the summer. Parker was a member of the National Council of Negro Women (NCNW), serving as president for the Charleston Council (1956-58); she was affiliated with the National Association of Colored Women’s Clubs (NACWC), served as treasurer and publicity chairperson for the South Carolina Federation of Colored Women’s Clubs (SCFCWC), and was a member of The Elite Art and Social Club, Charleston, SC. She attended Central Baptist Church, working with the church’s Missionary Society and the Ever Ready Club, and was director of the YWCA Senior Citizen Program (c.1975-1985). Parker died in Charleston on July 28, 1995. The collection consists of her early writings, correspondence, and photocopied newspaper clippings from periodicals such as The Lighthouse and Informer and The Charleston Chronicle. The material includes booklets, ephemera, awards and plaques, photographs, and details of Parker’s involvement with local and national organizations.

This collection was digitized and made freely available online through the generous support of Pivotal Ventures and the Digital Public Library of America.