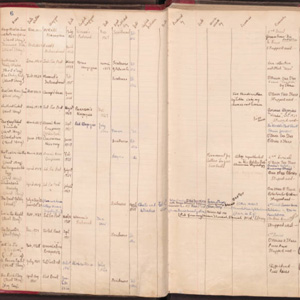 F. Scott Fitzgerald’s Ledger is one of the richest primary source documents in existence for any literary author. Fitzgerald began recording information in this business ledger sometime in 1919 or 1920 after leaving the Army and moving to New York to begin his professional life as a writer.
Fitzgerald divided the Ledger into five sections: “Record of Published Fiction,” “Money Earned by Writing since Leaving Army,” “Published Miscelani (including movies) for which I was Paid,” “Zelda’s Earnings,” and “Outline Chart of my Life.” The “Record of Published Fiction” and “Published Miscelani” are spreadsheets listing everything he wrote and its publication history up to the time of its final disposition. He meticulously tracked his earnings from 1919 through 1937 in the section titled “Money Earned by Writing since Leaving Army.” In addition, he recorded Zelda’s earnings from her writing. In the autobiographical section, “Outline Chart of my Life,” he provided background about his early years but later included monthly entries for each year.
F. Scott Fitzgerald’s Ledger is part of the Matthew J. and Arlyn Bruccoli Collection of F. Scott Fitzgerald held by the Irvin Department of Rare Books and Special Collections, located in the Ernest F. Hollings Special Collections Library at the University of South Carolina in Columbia, S.C.