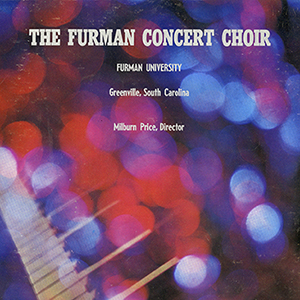 The Furman Concert Choir was organized in 1960 as a small, auditioned group which performs choral music form all periods of music history. The choir has performed at national conventions and conferences, television specials, and, in 1973, were one of only five American choirs selected to participate in the Vienna Choral Symposium. This collection contains recordings of some of their concerts from the 1960s and 1970s.