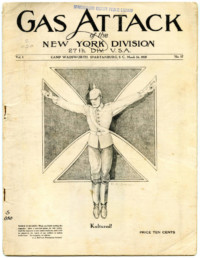 Camp Wadsworth was the temporary home to dozens of Army units, but most prominent among them was the 27th Division, which was composed of former New York National Guard troops. Prior to the American entrance into the First World War, the 27th Division had been stationed along the Mexican border, where the division published its own newsletter, The Rio Grande Rattler. That publication was continued after the division was moved to the cotton fields west of Spartanburg and renamed The Gas Attack. The newsletter contained divisional news, poetry, observations on camp life, cartoons, and humor columns. Twenty-four regular issues were printed weekly from November of 1917 until shortly before the division’s deployment in May of 1918. Two special issues were released in December of 1918 and in March of 1919. Many of the newsletter’s staff later had careers in publishing and one of the newsletter’s humor columns was later developed into a book, Edward Streeter’s Dere Mable.