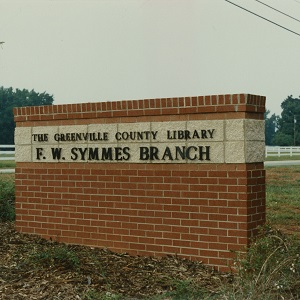 Collection of photographs from the SC Room Archives of the Pelham Road (Eastside) branch. When the Vaughn’s At East North Street shopping center opened in the fall of 1978, the library leased 5,000 square feet of space for a new eastside branch. It immediately became the branch with the highest book circulation, placed as it was in a high traffic mall in a well-to-do and well-educated community. The steady rise in use demanded a new building, which was opened October 7, 1990. Named for Frederick W. Symmes, a founder of the Greenville County Library and chairman of the board for thirty years, it features a 100-seat meeting room and over 12,000 square feet of space.