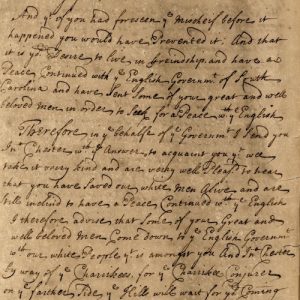 The journal of George Chicken (1685-1727) was written during the Yamasee War and documents a march across South Carolina to various Cherokee settlements as well as treaty negotiations for peace and alliances against the Creek tribes from January 1715 to February 1716. The journal also includes the correspondence of James Alford and Captain James Woodward.

George Chicken was a plantation owner from Goose Creek, South Carolina, a member of the S.C. Commons House, and a militia officer. From 1712 to 1727, Chicken was involved in forming the province’s policies concerning the neighboring Native Americans, and he also took an active part in fighting as captain of the Goose Creek militia company during the Tuscarora War (1711-1713) and the Yemassee War (1715). In 1715-1716, Chicken helped to establish a treaty with the Cherokee tribe, thwarting French hopes for a Creek-Cherokee alliance against the English.