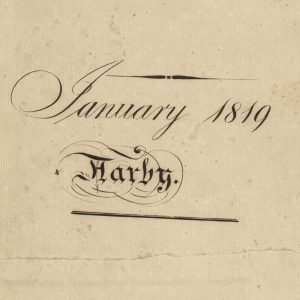 The Harby Academy Cashbook collection consists of the cashbook kept by Isaac Harby, founder of Harby’s Academy in Charleston, South Carolina. Harby’s Academy was established as a coeducational private academy in Charleston on January 3, 1810. The cashbook contains information for parents with children enrolled at Harby’s Academy. The cashbook includes notes on tuition fees and general expenses of the institution. The book also contains entries noting parents with enrolled students, tracks tuition fees for each child, supply costs for students, and also notes when students left the school. Isaac Harby was a leading advocate for the establishment of Reform Judaism in Charleston, South Carolina; founder of Harby’s Academy; and a prominent nineteenth-century educator, journalist, and playwright in the region. Related collections include the Isaac Harby Family Papers.

This collection was digitized and made freely available online through the generous support of the Council on Library and Information Resources.