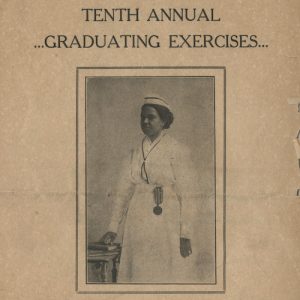 Helen Evangeline Banks Harrison was born in Hampton, Virginia in 1898 and is the daughter of Issiah and Anna DeCosta Banks, came to Charleston, South Carolina as a child and spent most of her life there. She attended city schools, Avery Normal Institute, and Howard University. In 1935, she began working as a clerk in the outpatient clinic of Charleston’s segregated Hospital and Training School for Nurses, where her mother served as superintendent of nursing for 35 years. Harrison became Medical Records Librarian at McClennan-Banks Memorial Hospital, the successor organization to the Hospital and Training School, partly named in honor of her mother. Evangeline Banks Harrison retired in 1966 and continued to serve a number of women’s, social and civic organizations, including the Charleston Chapter of LINKS, of which she was a charter member. Mrs. Harrison died in 1985. The collection consists of personal materials and those documenting Harrison’s mother, Anna DeCosta Banks, the Hospital and Training School for Nurses and McClennan-Banks hospital.

This collection was digitized and made freely available online through the generous support of Pivotal Ventures and the Digital Public Library of America.