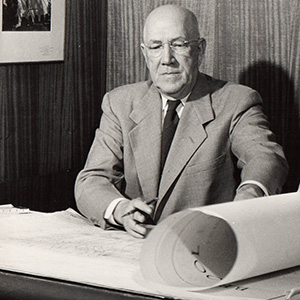 James Calvin Hemphill (1889-1970) was an architect born in Abbeville, South Carolina. The James Calvin Hemphill Collection contains architectural plans, artists’ renderings and photographs of buildings that he designed during his career.  Hemphill’s career spanned more than fifty-five years in South Carolina with a focus on Greenwood and Abbeville. He served as president of the South Carolina Chapter of the American Institute of Architects in 1946 and in 1966 he was awarded the Distinguished Service Award. Among his most notable projects are the Newberry County Hospital (1924–1925), Church of the Resurrection (1932), the Greenwood County Courthouse (1947), Self Memorial Hospital (1949–1950), and the Greenwood Public Library (1957). He also designed the Old Greenwood High School (1925) , which  is listed on The National Register of Historic Places, as well as the Wright-Easterby House (1925) that is a part of The Laurens Historic District, which is a National Historic District.