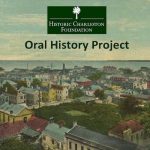 Historic Charleston Foundation’s Oral History Project began in 2003 as a staff initiative which grew from the realization that Charleston was rapidly losing members of the generation involved with the founding of Historic Charleston Foundation (HCF).  At that time, the decision was made to videotape hour-long interviews with former trustees and other pioneers in the preservation movement in Charleston.  The goal was to document memories about the founding of HCF and, at the same time, record first-hand accounts of life in Charleston in the early 20th century as well as local preservation efforts during that period.  More recently, HCF’s efforts have expanded to include interviews with residents of specific neighborhoods who speak about neighborhood history and their experiences with neighborhood changes over time; owners of historic homes who purchased their home through one of HCF’s revolving fund programs; and Charleston craftspeople whose restoration work has contributed to Charleston’s preservation legacy.

More oral histories will be added as they become available.

Charleston is experiencing rapid growth and market changes, which are significantly impacting the historic neighborhoods in the City of Charleston. Historic Charleston Foundation desired to document these changes from the perspective of long-time residents sharing their personal stories. Grants from both the South Carolina Humanities Commission and the Employees Community Fund of Boeing allowed HCF to proceed with this initiative and several oral history interviews have been conducted that focus on specific neighborhoods and the changes these residents have experienced over time.

Exploring the Eastside is a collection of oral histories created to speak on the current living and growing identity of the Eastside. This identity is not a monolithic one, nor an easily describable entity. These three oral histories serve as perspectives on family experience, housing, youth engagement, diversity in the neighborhood, activism, and various life experiences. Recorded as part of Historic Charleston Foundation’s summer Civic Collaboration with Morehead-Cain Scholars, made possible by funding from the Morehead-Cain Foundation.