Images from the Records of the Charleston County Public Library 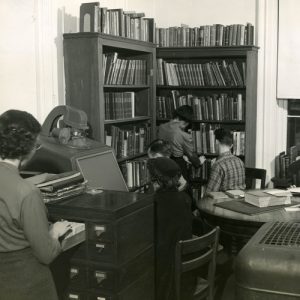 This collection consists of photographs and slides from the institutional records of the Charleston County Public Library. These images span the first four decades of the history of the institution, from its founding in 1931 as the Charleston Free Library, through 1969. The collection contains images from various library branches and service points, including the Main Library and Dart Hall Branch Library in downtown Charleston, the Bookmobile, Mt. Pleasant (Village Branch), Cooper River Memorial Library, and other locations throughout the county. Several images also include notable library staff members, such as Emily C. Sanders, Susan Dart Butler, Mae Holloway Purcell, and Janie M. Smith, as well as prominent community members, such as Mary V. McBee and John Bennett. Many of the black and white images are the work of local photographer Louis Schwartz. The 35mm color slides were taken in 1943 by Dorothy Dingley, a photographer in United States Navy who was stationed in Charleston during World War II.