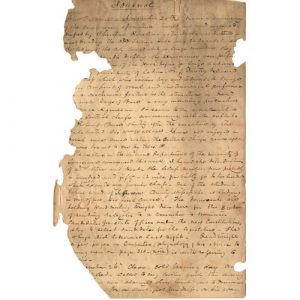 Collection consists of papers, including a handwritten “Journal” [diary], exercises, and lecture notes written by physician, J.F.R. The diary commences at New Orleans, Louisiana and includes entries about classes, students, and faculty at the medical department of the University of Louisiana. In May 1853 the author became the medical officer on the steamer Falcon and traveled to Panama, New Granada, Havana (includes descriptions of the houses and customs), and New York (with a stop in Charleston, S.C.). In New York he appeared before the Board of Medical Examiners to obtain a permit, then went to Philadelphia for two months until he obtained his results. After obtaining his permit the author proceeded to Washington, then was ordered to report to New Orleans and was assigned (March 1854) to the military asylum at East Pascagoula, Mississippi. When this branch was broken up in 1855 and the inmates were transferred to Harrodsburg, Kentucky, the author was briefly put in charge of the remaining men. Entries for October 1855 describe the author’s passage on the Ben Franklin (ship) from New Orleans to Louisville, and the people he encounters.