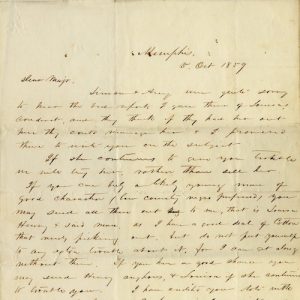 The letters from Hiram Tilman to his father, Major Alfred Wardlaw, between the years 1857-1862 comprise the Letters to Alfred Wardlaw, 1857-1862 Collection. Sent from Memphis, Tennessee and other various locations to Charleston, South Carolina, these letters primarily concern slaves on the Wardlaw family plantation, the transport of slaves to Memphis, Tennessee and Hiram Tilman’s military service along the Mississippi River during the American Civil War. In addition to the letters, this collection also includes documents with lists of furniture sent to Abbeville District, South Carolina.