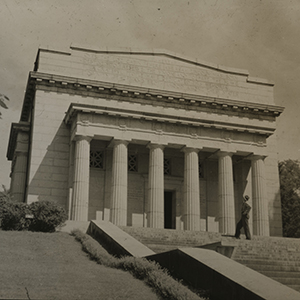 The Lincoln Farm Association Member Cards is a collection of over 140,000 individual and organization names who donated to build the memorial at the farmstead of Abraham Lincoln’s birthplace, which later came to be the Abraham Lincoln Birthplace National Historical Park. In 1905, the farmstead where Lincoln was born, just outside of Hodgenville, Kentucky, was in a state of neglect and disrepair. The property was purchased with the intention of creating a park for the people of the United States with the aim of unifying a country still deeply divided nearly 40 years after the Civil War. Those who donated between 25 cents and $25 to the Lincoln Farm Association were granted honorary membership. In a period of five years, mostly from 1906 to 1911, the bulk of public donations occurred across the United States and internationally.