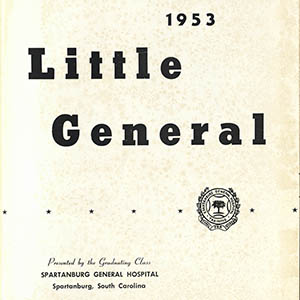 From 1943 to 1946, the Spartanburg General Hospital School of Nursing was affiliated with the United States Cadet Nurse Corps. Nurses in training could transfer to an Army, Navy or Veterans’ hospital during their last six months of training.  Also during the 1940’s, the school added a new library and laboratories.

The Spartanburg General Hospital School of Nursing continued to educate nursing students until it closed in 1967. Due to its imminent closing, there was expected to be a shortage of nurses for Spartanburg County and the surrounding region. In February 1967, hospital officials entered into an agreement with the University of South Carolina trustees to establish the University of South Carolina at Spartanburg, now USC Upstate, where nurses would be trained as part of a university program.  The Spartanburg General Hospital School of Nursing graduated its final class of nurses in 1969.

The Spartanburg General Hospital School of Nursing had a student-generated yearbook called The Little General. The first volume was produced in 1947, just after the conclusion of World War II, with the final volume produced in 1969 for the final graduating class of nurses.  The Little General yearbook chronicled all of the nursing students and the hospital’s growth throughout each year.

Any cookies that may not be particularly necessary for the website to function and is used specifically to collect user personal data via analytics, ads, other embedded contents are termed as non-necessary cookies. It is mandatory to procure user consent prior to running these cookies on your website.