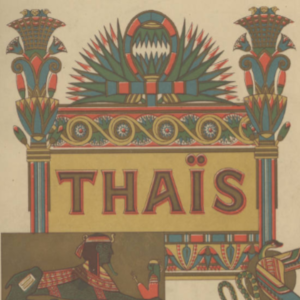 Jules Massenet (1842-1912) was a prolific French composer credited with completing 40 operas and numerous other stage works, most notably ballets and oratorios.  While his composition style largely conformed to the conventions of his day, some of his more unusual operatic forms include genres such as: miracle, comedie chantee, episode lirique and saynete. Works included in this digital collection, purchased through a generous donation from Dr. John K. Adams, represent first editions of some of Massenet’s more famous operas such as Thais, based on a novel by Anatole France, as well as more obscure, out of print works such as Sapho.