Mulberry Castle: Land of My Dreams 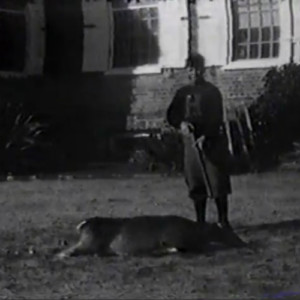 Clarence E. Chapman, a New York financier and stockbroker, and his wife Adelaide, purchased Mulberry Plantation (a/k/a Mulberry Castle) in 1916 at which time they undertook the restoration of the main house and rehabilitation of the grounds and outbuildings over the next several years. Mulberry Plantation was thus transformed into a site of leisure and recreation for the Chapmans and their guests.

This compilation of “home movies” shows Mr. and Mrs. Chapman during their vacations at Mulberry over a five-year period (ca. 1927-1932). The footage contains scenes of the Chapmans entertaining their guests as well as Mulberry Plantation laborers performing various service functions.

The silent B&W film footage is comprised of several reels of 8mm film that had originally been transferred to videotape sometime in the 1990s and later digitized. The time frame of the footage spans ca. 1927-1932; however, it was assembled in no particular order. Highlights of the footage include:

Panoramic views of the main house and grounds of Mulberry Plantation, including the landscape and gardens (both before and after the installation of Loutrel Briggs designs). Also features views of various secondary buildings and other locations on the grounds, e.g., the boat house, kitchen building, caretaker’s house, slave cabins, entrance gate, rice fields, kitchen garden shed, farm buildings, and river views.
Scenes of deer and duck hunting, picnicking, camping, horseback riding, and other leisure activities.
Visits to neighboring Berkeley County landmarks such as St. James Church, Strawberry Chapel, Pompion Hill, Rice Hope Plantation
Departures from and arrivals at the train station (Moncks Corner?) and the aftermath of a train wreck
See also the related Historic Charleston Foundation collection of photographs, “Rice Harvest at Mulberry Plantation.”

For more information about the acquisition of Lowcountry plantations by the Chapmans and other wealthy northerners in the early 20th century, see Leisure, Plantations, and the Making of a New South: The Sporting Plantations of the South Carolina Lowcountry and Red Hills Region, 1900-1940, edited by Julia Brock and Daniel Vivian (Lanham, MD: Lexington Books, [2005]), and Northern Money, Southern Land: The Lowcountry Sketches of Chlotilde R. Martin, edited by Robert B. Cuthbert and Stephen G. Hoffius (Columbia, S.C.: University of South Carolina, c2009).