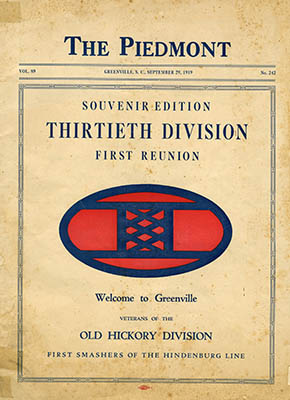 This September 1919 issue of The Piedmont newspaper is a special souvenir edition, commemorating the Thirtieth division’s return to Greenville, SC after fighting in World War I. The Thirtieth division, nicknamed Old Hickory, were attached to the Second Army of the British Expeditionary Force (BEF).  The Thirtieth was one of two US divisions that helped smash the Hindenburg Line, Germany’s final and strongest defense trenches in World War I. This special edition of The Piedmont newspaper contains many interesting news items including written testimonies, reports, and opinions from soldiers about both the war and the Thirtieth Division. This issue also contains a written statement from both the Mayor of Greenville, SC and the Governor of South Carolina honoring and acknowledging all of the feats and accomplishments from this particular division.