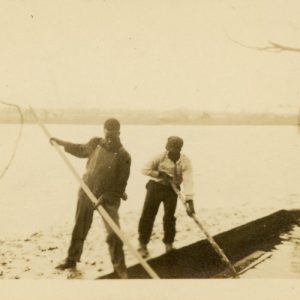 Mulberry Plantation is believed to have received its name because of an early interest in raising silk, as worms that spin silk generally feed on Mulberry leaves. However, the plantation was more successful as a rice plantation. Rice was cultivated at Mulberry Plantation from colonial days until 1918. Rice cultivation was difficult and dangerous work completed by slave labor. Slaves would clear the land, chopping down all trees and stumps. They would then excavate canals to bring tidal waters into the field. Trunks, or dams, were constructed to drain the water from the field for sowing and flood it for cultivation. Rice seeds would be coated with clay before they were planted so they would not float away when the fields were flooded. After the rice was harvested, the grain was beaten from the stalk with flailing sticks. The rice was then milled and winnowed to separate the grain from the chaff.

This collection consists of thirty-four photographs of Mulberry Plantation field workers performing various rice cultivation activities including preparing the field, planting, and winnowing. They are dated 1916-1918, and document the final rice harvest done at Mulberry.