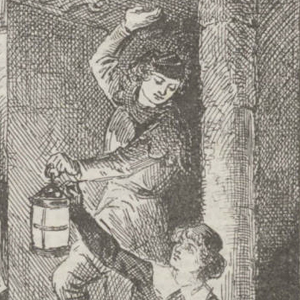 Robert Louis Stevenson’s The Black Arrow: A Tale of the Two Roses was first published in the weekly children’s periodical Young Folks Paper under his pseudonym “Captain George North”  beginning with vol. XXII, no 656 (June 30, 1883) and concluding in vol. XXIII, no. 672 (October 20, 1883).  Two other major works by Stevenson were first published serially in Young Folks Paper– Treasure Island in 1881-1882 and Kidnapped in 1886.  While Treasure Island received a less than enthusiastic response from readers, readers of Young Folks Paper enjoyed the action filled story of The Black Arrow.  The Black Arrow was fully illustrated and many of its installments appeared on the periodical’s front page.