Roman Vishniac: The Subject is Nature 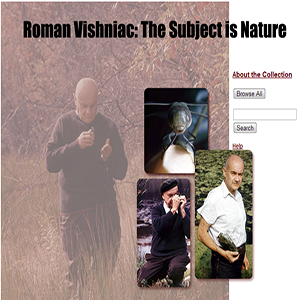 Roman Vishniac’s corpus is truly diverse and reflects the workings of a complex human being who saw the world in ways not typical of his peers. Born in Pavlavosk Russia in 1897, Vishniac pursued studies in biology, zoology and oriental art. As a young man his interest in microscopes and photography led to his contributions to the early development of microphotography. In 1920 he immigrated to Berlin where he became an avid amateur photographer and continued his biological studies through the microscope.
Vishniac emigrated in 1940 and arrived in the US in 1941, settling in New York City. From there he pursued the advancement of micro-cinematography and photography bringing both a technical and an aesthetic expertise to his work. His scientific imaging proved highly influential and became the basis for several large educational film productions, chief among them the Living Biology series sponsored by the National Science Foundation. He also taught and lectured widely, and his microphotographs appeared in leading magazines including LIFE and Omni. He died on January 27, 1990.
To the non-scientific world Vishniac is remembered for his telling photo-documentary of Eastern European Jewish life in the years prior to the World War II. Selections from this work have been printed in A Vanished World [1986]; To Give Them Light [1995]; andChildren of a Vanished World [1999].