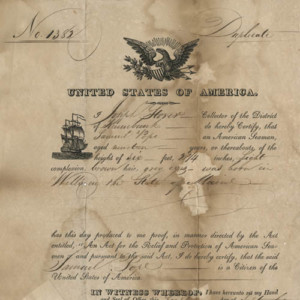 This document is an example of an American Seaman’s Protection Certificate. In 1796, the Fourth U.S. Congress authorized Seamen’s Protection Certificates (SPCs) to protect American merchant seamen from impressment into the British Navy. The British believed that they could force British seamen in port or on the high seas into service and it was common for them to impress any English-speaking sailors. The documents basically served as “merchant seamen’s passports.” The impressment of American seamen into service of the British Navy was one of the causes of the War of1812. This SPC was issued to Samuel Pope on September 1, 1820 by Joseph Storer, Collector for the District of Kennebunk, Maine. Capt. Samuel Pope, who was born in Wells, Maine in 1800/01 is believed to have moved to Horry District, South Carolina in the 1830s, where in 1837 he and a partner, Henry Buck, purchased 432 acres on the Waccamaw River at Murdock Landing where they established “Pope’s Mill”, a steam powered saw mill. He eventually sold his interest in “Pope’s Mill” to Buck, and Murdock Landing later became known as Bucksport. Capt. Pope moved upriver to the village of Conwayborough where he established a shipyard. In 1856 Capt. Samuel Pope was elected mayor, then called “intendent,” of “Conwayboro.” He died in 1863 and was buried in the old village burial ground beside Kingston Presbyterian Church, of which he was a founder, in what is now known as Conway, South Carolina.