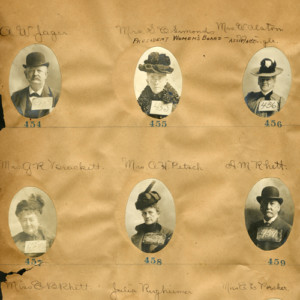 The photos in this collection were taken as part of a season pass that patrons could purchase for unlimited admission to the South Carolina Inter-State and West Indian Exposition, held in Charleston in 1901 and 1902. Each individual’s photo was mounted in a passbook kept by the patron and a duplicate photo was mounted in an album kept by the Director of the Departments of Admissions and Collections, Hugh James Fleming (whose image is on page 34, number 297). The album contains images of 1,326 people, of whom 1,213 are identified by a caption presumably made at the time the photograph was taken. The total number of season pass photos taken for the Exposition is unknown, but similar photos beyond the present collection are known to survive in extant individual Exposition pass books. Mr. Fleming donated this photographic album in 1948 to the Charleston Free Library (now called the Charleston County Public Library). The letter regarding its provenance and donation to the library has been included as the final image in this collection (number 157). Since the paper on which the gelatin silver photographs are mounted is extremely brittle and in a state of deterioration, the album was disbound several years prior to its digitization in order to facilitate its preservation.