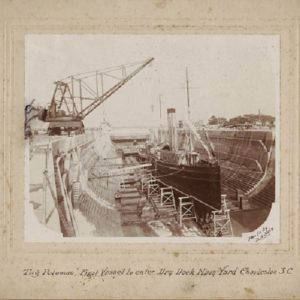 Still images found among the belongings of Henry T. Zacharias, a Charleston builder and contractor in the late 19th- and early-20th century. Zacharias built and/or repaired many notable buildings in Charleston. Includes photographs and one engraving of buildings on which he worked (or likely worked); photographs of battleships in dry dock at the Charleston Navy Yard; and a photograph of his gravesite at Magnolia Cemetery. (Note: Two of Mr. Zacharias’s ledger books are in Special Collections at College of Charleston, ‘Henry T. Zacharias Ledgers, 1905-1910.’)