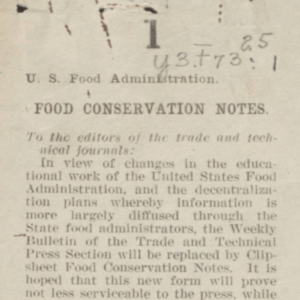 The U.S. Food Administration was established by Executive Order 2679-A (August 10, 1917). President Wilson appointed Herbert Hoover as its administrator. Hoover realized that conservation was the only way to quickly increase food stocks and correctly believed that people would voluntarily conserve food to help the war effort. Through promotions such as Meatless Mondays and Wheat-less Wednesdays, the agency was able to reduce domestic food consumption by 15% and supply US and allied forces. The US Food Administration ceased with Executive Order 3320 (August 21, 1920) after post-war shipments of food had helped prevent famine in Europe.