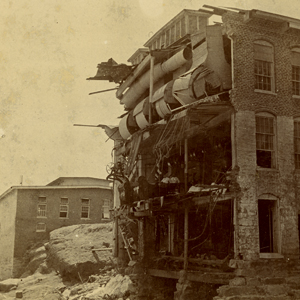 William Lynch assembled an impressive collection of stereoviews, or stereoscopic photographs. These are card-mounted photographs that render a three-dimensional image when placed in a specialized viewer. In the digital collection presented here, the front and reverse of each stereoview are shown. Also included is a 3-D anaglyph that allows users with 3-D glasses (with red and blue lenses) to view the image in full three dimensional depth.  The entire collection consists of 122 stereoviews. The focus is on Spartanburg and South Carolina, but a few examples from other places are included as well.
Stereoviews were a popular form of parlor entertainment from the 1860s until the 1910s. The most popular images were exotic scenes in distant lands, but some local scenes were captured, particularly after the devastating 1903 Pacolet River flood. Gastonia-based photographer Thomas R. Shuford traveled to Clifton and Pacolet in the days following the flood and documented much of the damage and cleanup efforts.
Another early stereoscopic photographer active in Spartanburg was W. T. Robertson. Primarily based in Asheville, Robertson created a series of stereoviews documenting landmarks around Spartanburg in the mid-1870s. These are among the oldest outdoor photographs of Spartanburg.
The Lynch family has shared this collection with the Spartanburg County Public Libraries for the enjoyment of anyone with an interest in Spartanburg’s history.