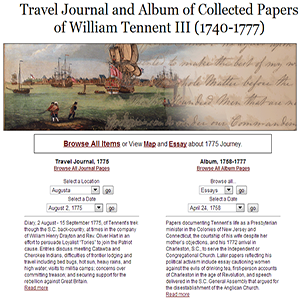 The journal covers Tennent’s trek though the S.C. back-country, at times in the company of William Henry Drayton and Rev. Oliver Hart in an effort to persuade Loyalist Tories to join the Patriot cause. The album contains papers documenting his life as a Presbyterian minister in the Colonies of New Jersey and Connecticut, the courtship of his wife despite the objections of her mother, and his 1772 arrival in Charleston, S.C., to serve the Independent or Congregational Church among other topics.