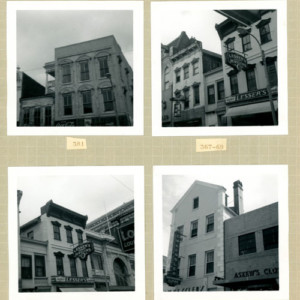 In 1967, Historic Charleston Foundation was deeply concerned about the conditions of the downtown area, particularly the commercial blocks of King Street. Because the Foundation believed that the survival of King Street as a thriving retail shopping district was vital, it launched a feasibility study to determine the potential of the area. The study examined traffic patterns, land use, and historical significance. It is assumed that this photographic survey of King Street buildings was done in conjunction with the feasibility study. The survey contains 74 photographs of King Street buildings between Broad and Calhoun Streets, both B&W and color, mounted on the pages of a photograph album. The survey also includes four drawings showing the footprints of King Street buildings between Broad and Columbus Streets, color-coded to indicate the historical significance, area conditions, and proposed reuses.