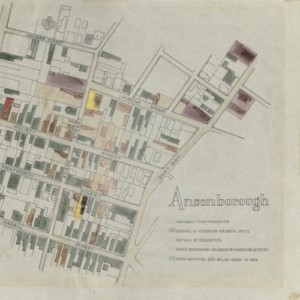 In the 1950s many houses in Ansonborough were threatened with ”demolition by neglect,” having stood vacant or fallen into severe disrepair. In order to encourage homebuyers to move into the neighborhood to save these formerly unwanted treasures, Historic Charleston Foundation (HCF) was the first organization in the country to develop the Revolving Fund as a preservation strategy. The initiation of this fund in 1958 enabled HCF to begin the Ansonborough Rehabilitation Project, an extraordinary effort to save a six-block neighborhood bordered by Market, Calhoun, East Bay, and Meeting Streets. Through the Revolving Fund, HCF sought to purchase, stabilize and resell historic properties with protective covenants in Ansonborough where more than 60 structures were rehabilitated over a 12-year period. The accomplishment was hailed nationwide, and other preservation programs across the United States modeled local initiatives on the Charleston program. HCF’s Ansonborough Rehabilitation Project is considered one of the first successful attempts in the country to preserve an entire neighborhood.

For ease of access, this collection can also be browsed by folder: