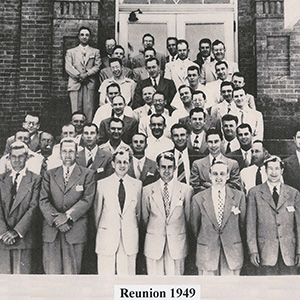 The Clemson College Class of 1939 is a unique class. After graduation, not only did almost all of its members serve in World War II (with 26 making the ultimate sacrifice), but they also made a series of commitments to the University at their 50th Golden Anniversary Reunion in 1989 that have both served to sustain the class into perpetuity and to enhance the Clemson experience as a whole. The class contributes to student scholarships, has endowed a Faculty Award for Excellence, and supports projects in the Heritage Gardens, part of the Clemson Botanical Garden. Membership to the class increases each year with the induction of the Faculty Award for Excellence winners as well as the induction of other members who support the class. A Leadership Committee has been established for the honorary members to work with the remaining class members to perpetuate the memory, ideals, and goals of the original members of the Great Class of ’39.