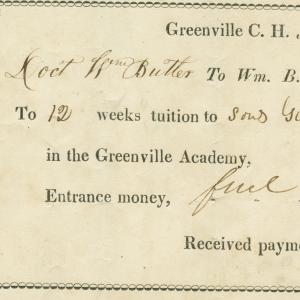 William Butler [1790-1850] moved to Greenville from Edgefield in 1825 where he began to practice as a country doctor. He was educated at the University of South Carolina and served as a surgeon during the War of 1812. In 1841, he was elected from Greenville District as a Whig to the twenty-seventh Congress, and eight years later he was appointed agent of the Cherokee Indians. Already in poor health, William Butler died shortly after moving to Oklahoma to assume his position. His wife, Jane T. Perry, and children moved back to Greenville. This collection includes Butler family receipts from 1839-1886, which provide a glimpse into the daily life of Greenville residents in the mid-1800s.