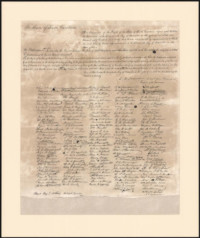 Despite resistance from many who hesitated to sever ties with the United States, the idea of Southern independence gained popularity as political rhetoric intensified between slave-holding and abolitionist states during the 1850s. In December of 1860, a convention of delegates from across the state took the initiative and repealed South Carolina’s 1788 ratification of the United States Constitution, thereby severing South Carolina’s legal ties to the rest of the United States. As other Southern states followed, they joined to form the Confederate States of America. When war came the following spring, Spartanburg County supplied troops and resources to the Confederacy’s fight, although battlefield conflicts never reached our borders. Instead, a complicated home front challenged every resident while the harsh realities of warfare tore away the preconceptions of those who chose to fight in Virginia and elsewhere. The items included in this collection illustrate many of the elements that defined life during the Confederacy for Spartanburg residents, both at home and in the field.