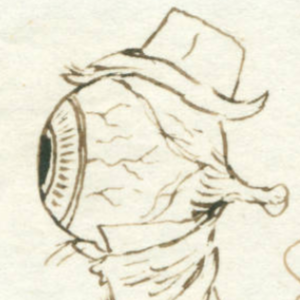 The Joel Myerson Collection of Nineteenth-Century American Manuscripts, Images, and Ephemera is a part of the larger Joel Myerson Collection of Nineteenth-Century American Literature. The collection contains letters, manuscripts, cabinet cards, cartes de visite, and a variety of other ephemeral material relating to nineteenth-century American authors, especially those associated with the Transcendentalist movement. The bulk of the collection is comprised of letters by Ralph Waldo Emerson, many of which are previously unpublished. Additionally, Dr. Myerson’s collection contains the largest collection of Emerson iconography. Along with Emerson are materials by or relating to such figures as Theodore Parker, Walt Whitman, Bronson and Louisa May Alcott, Christopher Pearse Cranch (whose caricature of Emerson’s transparent eyeball can be seen to the right), and significant items from other writers of the period such as Nathaniel Hawthorne, William Ellery Channing, and James Russell Lowell.