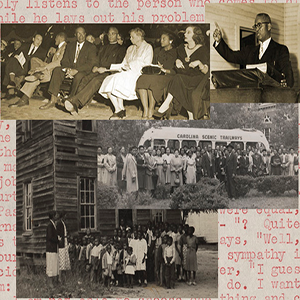 This core unit of three hundred fifty items-two hundred sixty-two manuscripts (letters, speeches, reports, narratives, and affidavits) and miscellaneous printed artifacts (news clippings, programs, booklets), and eighty-eight photographs-added to the papers of the late Joseph Armstrong De Laine (1898-1974) covers chiefly the period from 1942, when he submitted his annual report as secretary of the Clarendon County Citizen[s] Committee, to 1974, when he delivered an address entitled “History leading up to the U.S. Supreme Court’s Decision outlawing Segregation in Public Schools.” The latter was a detailed summation of almost half a lifetime spent in pursuit of equal opportunity for African-American schoolchildren in Clarendon County and, by virtue of the wider application of the court cases which resulted from the efforts of this local teacher-principal and A.M.E. minister, across the nation. “It is a privilege undreamed of to relate some of the facts which I have been involved in leading up to the U.S. Supreme Court’s Decision, which was handed down 20 years ago,” he declared in what would be the last year of his life. The various letters and documents here provide the evidence not only of DeLaine’s activities, but also of the trials and tribulations to which he was subjected as a result of his actions on behalf of equal rights. An early, succinct communication from Harold R. Boulware, 1 October 1947, is a portent of things to come. The Columbia attorney informs DeLaine that he is sending along a letter for [Levi] Pearson to sign and adds simply-“I am now processing the law in an effort to file suit in this case.” “This case” was the school bus transportation suit which became known as Pearson v. County Board of Education and would be filed on 16 March 1948. On 8 June it was thrown out of court because Pearson was found to have no legal standing: he lived in the wrong school district.