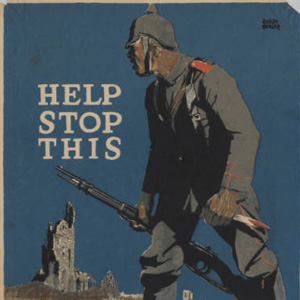 The posters in this digital collection represent only one small part of the Joseph M. Bruccoli Great War Collection at the University of South Carolina. The Collection was established in 1997 by Matthew J. and Arlyn Bruccoli in memory of Joseph M. Bruccoli, Matthew J. Bruccoli’s father, who fought in the first World War. While the majority of the posters in the collection are American, the collection also includes British, French, and German posters, along with a few posters from Austria, Canada, Italy, and Russia. Posters were an inexpensive and effective way for national governments and organizations to communicate with the public. Common themes included recruitment, support of the war effort, thrift, and the promotion of the sale of bonds. The work of many well known artists from the era is represented in the Collection. Those represented include Howard Foster Christy, Harrison Fisher, James Montgomery Flagg, Joseph Pennell. Lucien Jonas, B. Chavannez, Adolphe Willett, and Louis Raemaekers. This is a dynamic digital collection, look for new additions as new posters are added to the Library’s holdings.