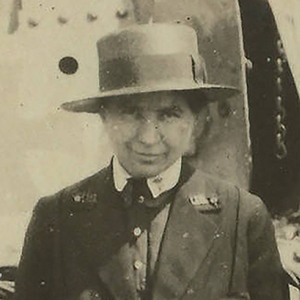 Marguerite Andell was born on November 6, 1884 on John’s Island. Ms. Andell was a graduate of Roper Hospital’s School of Nursing in 1914, and was elected Superintendent of Nurses in 1924, a position in which she proposed ideas that were ahead of her time. She retired in 1948 after working for 24 years at Roper Hospital and the Medical College School of Nursing. The Marguerite Andell Collection, 1919-1945, includes a photograph album, many postcards and personal letters from France, with dates ranging from 1919 to 1945. Miss Andell appears in many photos throughout the album. These photographs were presumably taken in Europe during World War I, and include scenes of a funeral and various cemeteries, troops’ bunks, damaged buildings, hospital scenes, wounded soldiers, nurses, and tanks. There are photos with the Red Cross, with medical doctors, and scenic photos of various areas.