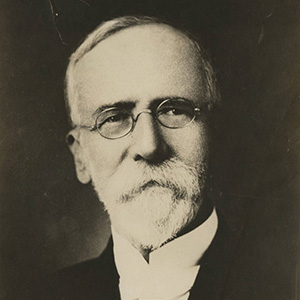 In 1864, a 22-year-old seminary graduate named William Plumer Jacobs arrived in the small town of Clinton to become pastor of the Clinton Presbyterian Church (now the First Presbyterian Church, Clinton). Before his death in 1917, he was to transform the town. Wishing to make Clinton the Presbyterian center of the South, he was instrumental in founding the Clinton High School Association (1872), the Thornwell Orphanage (1875), and Clinton College (1880). Clinton College is now Presbyterian College, a thriving liberal arts college related to the PCUSA. Dr. Jacobs had a strong impact on other aspects of Clinton’s life. He was the moving force behind the temperance movement in the town, and was also responsible for the formation of the Clinton Library Society. He spurred the development of the publishing industry in Clinton when he began publishing the True Witness in 1866, followed by Farm and Garden in 1867; this eventually resulted in the organization of the Jacobs Press. Through his close relationship with the Bailey family, he was a strong advocate for the formation of the Clinton Cotton Mills, which were central to the town for 100 years. The collection of materials reproduced here gives a snapshot of Dr. Jacobs and his contributions to this small upstate town. Included are photos and documents related to Dr. Jacobs himself, to Thornwell Orphanage, to Presbyterian College, to the Clinton Presbyterian Church, and to the Library Society. These materials came from several collections in the Jackson-Arnold Archives at Presbyterian College, including the Thornwell Orphanage collection, the William Plumer Jacobs Collection, the Presbyterian College archives, and the Founder’s Library.