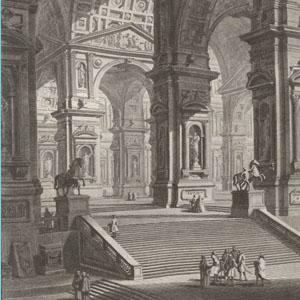 Giovanni Battista Piranesi (1720-1778) was an innovative graphic artist who is most known for architectural studies of Rome and his imaginary prisons. The Irvin Department of Rare Books and Special Collections at the University of South Carolina holds a rare complete set of his posthumous Opere [Works] (1837-9), which consists of twenty-nine elephant-folio volumes that include over 1000 images and assemble all of his individual publications. A developing project at USC aims to make this rare material accessible in a complete digital collection, found here, and, in the pages at “The Digital Piranesi,” to make it visible, legible, and searchable in ways that the original works are not.

Piranesi’s earliest works were individual engravings of Roman ruins marketed towards visitors on the European grand tour. He soon began producing architectural fantasies and increasingly larger views, and he not only added engraved textual keys to these views but also supplied typeset indices, prefaces, and essays in his published volumes. Pushing against the limits of both the printed page and the bound book, his multi-plate engravings become elaborate foldouts in bound volumes, and the references in his maps and indices direct users through unnumbered pages and between different publications. Individually, his publications, especially the well-known “Carceri d’invenzione” [“Imaginary Prisons”] (1750) and Vedute di Roma [Views of Rome] (1748), are significant works in the fields of art and architectural history and the cultural eras of Neoclassicism and Romanticism. Collectively, as they are presented in the Opere, his works entail elaborate interconnections that are rarely seen. USC’s collection allows Piranesi’s webs of cross-referencing to be traced, and it displays his texts alongside the images that support their claims.

This set was printed under the direction of his son Francesco by the Didot printing house in Paris. While the bulk of the volumes duplicate Giovanni’s original publications, the Opere is also an assemblage of heterogenous material, including Giovanni’s “Carceri” alongside other original publications in one volume, copies of paintings in another, and studies of sculpture in another. As an especially significant publication in the early stages of Piranesi’s long-standing and far-reaching cultural influence, the Opere deserves to be seen in its complete and composite nature.