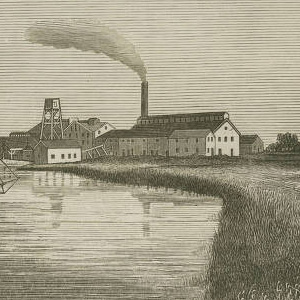 During the late 19th century the discovery of phosphate deposits in the Charleston and Florence areas marked the beginning of a rapidly growing industry in South Carolina. Phosphates are rocks formed from the fossilized remains of sea creatures found in areas once covered by oceans. In South Carolina, phosphates were used as fertilizers to extend the life of crops. Freedmen flocked toward the industry seeking employment, and with the financial support of Northern financiers, Carolina farmers began production of this highly sought-after material. Soon after the introduction of the phosphate industry, the popular market collapsed due to an over-saturated market. After only twenty years of production, the phosphate industry was essentially over for South Carolina. Long-since ended, signs of the briefly successful industry still exist in Charleston in road names and signs of geological incursion.