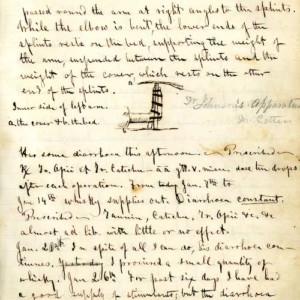 Richard Love Johnson (1841-1913) served the Confederacy as an Assistant Surgeon with several units, most notably the 3rd and 15th South Carolina Infantries. Johnson was stationed at various posts during the Civil War including McPhersonville in Beaufort District. His handwritten entries contain the names and units of his patients, notes on their wounds, treatments, surgeries and outcomes from 1863 to 1864. Following the Civil War, Johnson and his family resided on Edisto Island for several years where he turned to practicing obstetrics most often at John Wright’s Seaside Plantation and Dr. William M. Bailey’s Maxcy’s Plantation.

He documents two veterinary cases: a cat giving birth and the removal of a tumor from a donkey’s eye. During his time on Edisto Island he kept accounts relating to managing a small cotton farm with freed African-American laborers. He includes the names and payments to his workers. Johnson would later practice medicine in Louisiana and Missouri. He revised the journal several times adding notes about medical journal articles and updates regarding some of his patients seen in other circumstances. The latest note with a date was done in 1883. Johnson died and was buried in Rolla, Phelps County, Missouri in 1913.

This journal is significant because Johnson’s depictions give a firsthand view of medical practices during the Civil War and Reconstruction eras when prescribing whiskey, eggs, and opium were standard treatments. The medical cases and farm accounts typically include the names of individuals involved and thus may be useful for genealogical purposes.