Selections from the Bradford Scrapbook Collection 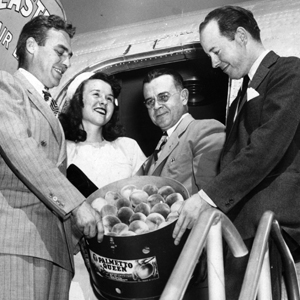 The photographs by Randy Bradford from this collection of historical Spartanburg images are from the decade of the 1940s. Bradford recorded important events, political leaders, and visiting celebrities. His photographs also depict the everyday life and interests of Spartans from this era.
Randolph B. (Randy) Bradford attended Spartanburg, South Carolina schools and graduated from Wofford College. He became a photographer while working for the Spartanburg Herald Journal in 1941. After serving with the Army Air Forces during WW II, Bradford returned to the Herald-Journal as Chief Photographer. Many of the photographs in this collection first appeared in the Herald-Journal. In the early 1950s Bradford was an owner of B & B Studio, which served the newspaper and also the general public. In 1961 he resigned from this studio to form his own business, Bradford Photography, which he operated for 30 years.