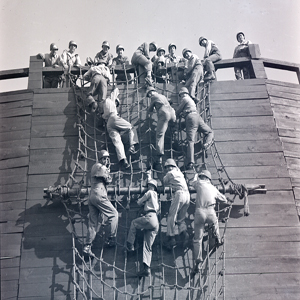 One of the nearly 200,000 men who passed through Camp Croft was Joseph Peter Pizzimenti of Detroit, MI. He was a musician in the jazz and marching bands at Croft from 1941 until early 1945. In addition to being a musician, Pizzimenti was a photographer and had permission to take pictures in camp. In 1945, Pizzimenti was shipped to Okinawa and spent the last six months of his service in the South Pacific. He died in 1996. His son, who donated these images to the Spartanburg County Public Libraries, said he always spoke fondly of his Army days in Spartanburg County.