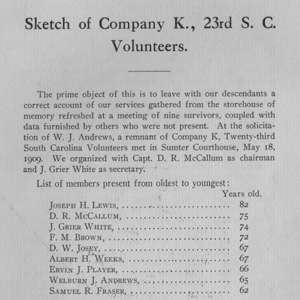 Andrews, with the assistance of some of his fellow soldiers, recalls the Company’s combat experiences during the second Battle of Bull Run, Virginia (1862; also called Second Manassas) and the siege of Petersburg, Virginia (1864-1865), as well as his own capture and imprisonment at Point Lookout Prison Camp for Confederates in Maryland following the Battle of Fort Stedman. Andrews served as a private.