The Alphabet Rendered Instructive and Entertaining 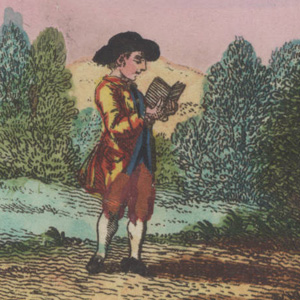 This beautifully illustrated alphabet book, published in 1775, is an excellent example of early children’s literature from the eighteenth century. Produced by copperplate engraving, the book originally sold plain at 9d. (9 pence) or hand-colored at 1s6d (1 shilling, 6 pence). Published by William Tringham of London, this copy was probably sold plain and colored later. The reproduction method, which was relatively expensive at the time, was also used by the great late eighteenth-century children’s publisher John Newberry. The book consists of 26 plates, each representing a letter of the alphabet accompanied by an illustration and a verse. Lessons provided by each verse combine instruction of both an orthographical and a moral nature.