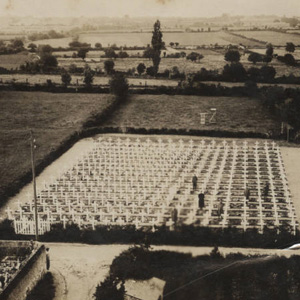 This collection contains 32 letters and postcards to and from Delbert Claire Brandt (Claire Brandt), a young man from Sharon, Pennsylvania who served with the 1st Cavalry in World War I, was wounded, and died on November 16, 1918. The letters were written between May 1918 and November 1918. Most of the letters are from Claire Brandt to his sister Beatrice. Topics range from the care packages which Beatrice sent to Claire Brandt’s travels in the army. After being assigned to several camps in the U.S. for training, he was sent to France where he died in battle at the Meuse-Argonne conflict on November 16, 1918, five days after the armistice was signed.
The collection also includes family photos, newspaper articles, and formal correspondence between the army and Claire Brandt’s family. In addition, the collection contains information about the family’s tradition of military service from Claire Brandt’s grandfather, John Murray, who fought in the Civil War through his nephew, Charles Brandt, who joined the 1st Cavalry in World War II. This collection was assembled and generously donated by Claire Brandt’s niece and daughter of Charles Brandt, Ms. Charline Marie Claire Brandt, of Columbia, S.C.