The Harry and William Birch Collection 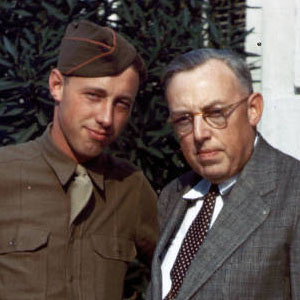 Comprised of over 40 hours of motion picture film and video, photographs, paper records and equipment, this collection documents the careers of two distinguished news cameramen who were also father and son. Through home movies and photographs the collection provides rare insight into the personal lives of news cameramen from the silent and early sound period. It also provides a detailed look at life as a U. S. Army Signal Corps cameraman during World War II. The 16 mm film and video elements from Bill Birch’s company, William H. Birch & Associates, document the work typical of industrial and documentary filmmaking from the 1970s to the 2000s and encompass subjects from all over the United States and the world.

Harry Birch first began filming news in Chicago sometime around 1915 and continued to make news and industrial films in the Chicago and Detroit area until the 1950s. He also worked in Chicago’s television industry prior to his retirement. William “Bill” Birch began filming news while still in high school. Shortly before World War II he became a staff cameraman for Fox Movietone News. During the war he filmed with the 834th Signal Photographic Detachment (the unit of the Signal Corp run by Major Frank Capra). After the war he returned to Chicago and to news. He established and ran the Network News Bureau for NBC in Chicago. Bill worked in television news for over two decades before moving into feature filmmaking, documentaries and industrials. The winner of many awards for news and documentary filmmaking, he ran his company, William H. Birch and Associates, until his death in 2011.