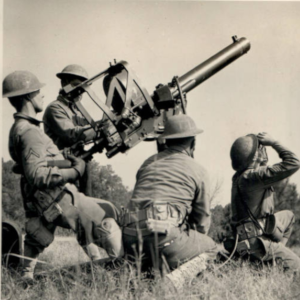 After World War I, many Americans believed that the United States should no longer involve themselves in other countries’ conflicts.  Some also believed that keeping a large standing army was detrimental to both civilian control of government and to the national economy.  Throughout the 1920s and early 1930s, Congress decreased the size of the military and slashed military budgets.

During the 1930s, German and Japanese aggression increased fears over engaging in another overseas war.  Between 1935 and 1939, Congress passed several laws, collectively known as the Neutrality Acts, in an effort to ensure that the United States would remain a neutral power.  After Germany’s invasion of Poland in September, 1939, both the public and the government slowly realized that the United States could not remain neutral.

For the next two years, as fighting in Europe and Asia escalated, the United States military knew that they had to prepare for war.  In June, 1939, the United States Army stood at 187,893 personnel in the regular army with 199,491 personnel in the National Guard.  Equipment was either outdated or non-existent and training, especially for the Guard units, was inadequate.

During the summer of 1940, the Army held maneuvers with both regular Army and National Guard units.  The results were disastrous.  News correspondents who covered the maneuvers told a shocked nation that the Army and the National Guard were woefully unprepared to defend the country.  This spurred Congress, in September, 1940, to induct the National Guard into Federal service and to institute the first peacetime draft in American history.  Congress also called up all reserve officers and increased the military’s budget.  For the next two years, the military strove to build up their forces.

After the disaster of the 1940 maneuvers, the Army embarked on a new training schedule.  As part of the training program, the Army conducted two of the largest field maneuvers ever held in the United States in 1941.  The first took place in Louisiana in September.  The second took place in sixteen counties in North and South Carolina in October and November.

For two months, 400,000 soldiers of the First Army “fought” across the Carolinas.  Landowners gave the military permission to crisscross their property and bivouac in their fields.

The First Army’s Public Relations Division was stationed at the Kirkwood Hotel in Camden, S.C.  This division provided information to citizens about the operation, hosted military officers from around the world, and provided information about the maneuver area to the incoming officers and enlisted men.  Lt. Col. John F. Wall, a Camden resident, commanded the Visitor’s Section.  All of Camden residents showered the First Army with hospitality.  They invited the soldiers into their homes, socialized with them at parties and clubs, and marveled at the tons of equipment rumbling through their quiet streets.

These maneuvers allowed the Army to evaluate their officers and to experiment with new tactics based on the European war, especially the importance of tanks, air power, and coordination between artillery, infantry, and aircraft.  Army leaders uncovered training weaknesses while learning hard lessons in the large scale movement of personnel and supplies over long distances.  For the public, the success of this training exercise boosted civilian moral and confidence in the Army.

Less than one week after the end of the Carolina maneuvers, the Japanese bombed Pearl Harbor and the United States entered into a global war.