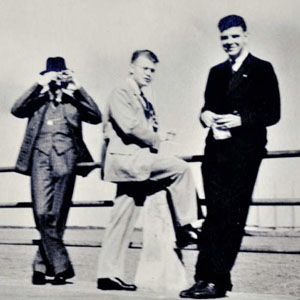 William D. Workman, Jr. (1914-1990) was a well-known South Carolina journalist, author, newspaper editor, and talented photographer. His career as a newspaperman made him a household name throughout the state. A strong believer in states’ rights and the virtues of the Southern culture, Workman authored The Case for the South (1960), a statement of the South’s position on integration. Although unsuccessful, Workman’s 1962 bid to become one of South Carolina’s United States Senators is credited with establishing the structure for a statewide Republican Party in what was then a solidly Democratic state. The Workman collection’s photographs include thousands of images taken across South Carolina and feature prominent South Carolinians in and outside of the state. These provide a remarkable view into life in the state during a time of immense change.  Highlights include pictures of political activity (notably the Dixiecrat Movement and Workman’s 1962 Senate campaign), the creation of the Savannah River Plant, Charleston in the 1930s, Workman’s military service in World War II, agricultural festivals, and views of South Carolina events, architecture, and scenery. The William D. Workman, Jr. Papersare held by the University of South Carolina Libraries’ South Carolina Political Collections. The collection consists of 65 linear feet of material from 1915-1997. For a folder level description, see the collection finding aid.

*Metadata: USC’s digital collections are normally described at the item level, but the Workman digital images have been described at the folder level to increase access while making the most efficient use of NHPRC funds. **Discoloration: None of the images in this collection have been digitally altered or color-corrected in any way. However, scanners sometimes detect slight imperfections that the naked eye cannot. The creation of this digital collection was made possible by a grant from the National Historical Publications & Records Commission.