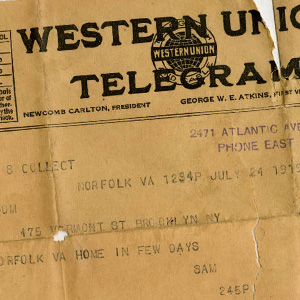 Samuel Bloom (1895-1976), a first-generation Ukrainian immigrant and recent City College graduate, served as private first class and signaler with Company L, 325th Infantry Battalion, US Army, from October 1917 till July 1919. In April 1918, he went with his company to France, training behind the Somme front, and then going to signal school, before service in the Lorraine count-offensive (July), the St. Mihiel offensive (mid-September, and the Meuse-Argonne offensive (September-October), with fighting in Cornay, Fleville, and the Aire River, till he was wounded by shrapnel in the left hand on October 16. After the Armistice, he studied at the University of Montpellier (Febrary-June 1919), before Returning to the U.S. Bloom’s regular letters home about his war experience, and other materials, donated to Rare Books & Special Collections in 2004 by his sons Dr. Robert A. Bloom and Mr. Jack Bloom, are written on highly acidic paper now too brittle for handling. This project makes available the full sequence of Blooms life during World War I including his letters, postcards, and diaries, arranged chronologically.